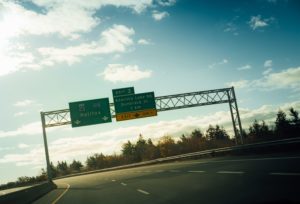 The iconic signs that line America’s highways, interstates, and local roads are some of the most recognizable travel icons in the nation. In fact, one stretch of highway in Michigan, called M-22, that runs along the Lake Michigan shoreline of the Leelanau Peninsula, is so famous that multiple retail locations have been erected along its route to sell M-22 merchandise. This is only one example of how iconic America’s highway signs have become. But there’s a bit more to these signs than meets the eye. We’re going to cover some history of the interstate highway system, and the important role highway signs plays in keeping our roads safe.

Since its inception, signage has been key to the success of America’s highway system. In the early 1920s, Highway officials and experts from Indiana, Wisconsin, and Minnesota toured through sections of the U.S. to create a plan for standardizing highway signage throughout the country. Officials standardized these early sign shapes via the level of risk associated with the highway situation they marked. Color standards were added several years later. Some of these standards are still in use today!

The first Manual on Uniform Traffic Control Devices (MUTCD) was published in 1937 to regulate the design, implementation, and use of signage, road surface markings, and traffic signals to keep travelers safe. Since then, the MUTCD has experienced many revisions to reflect changes in technology, traffic control, and traffic operations.

In 1956, U.S. President Dwight D. Eisenhower enacted the Federal Highway Act of 1956. It took over thirty-five years to complete the initial portion proposed by Eisenhower.

In 1957, Richard Oliver, an employee of the Texas Highway Department, designed the first Interstate Highway Shield. This design has been revised three times since then, in 1961, 1971, and 1978.

Decades later, it’s taken half a trillion dollars to build out the interstate highway system completely. And highway expansion continues in America’s fastest-growing cities, like The Woodlands, Texas.

While there are federal regulations on interstate highway sign designs, all state, territory, county, and secondary roads have much more variability in design standards and quality.

The biggest concern with highway sign design is legibility, as driver’s passing at high speeds must be able to read them. Legible signs help keep traffic moving smoothly and without incident.

The continuity of design for interstate highways contributes to a passerby’s understanding of where they are. When signs are improperly marked, this can lead to confusion and even danger on the road.

Confused is exactly what Richard Ankrom was in 1981 when trying to navigate between Interstate 5 and the 110 freeway. Ankrom missed his ramp and accordingly got lost outside of Los Angeles because of an improperly marked sign. So, Ankrom and a group of friends decided to do something about it.

After researching and manufacturing the proper signage, Ankrom and his friends installed the correct sign some twenty years later. Then, knowing it was unlikely his sign would stay, Ankrom asked for the sign back as a memento. Instead, the California Transit Department kept the sign because it met regulations! You can learn more about Ankrom’s adventure here.

As Ankrom’s story indicates, proper signage is key to successful highway navigation and traffic safety. Signage and marking guidance found in the MUTCD and other regulatory documents are critical to maintaining order and safety on America’s highways.