The Barriers to Women in Trade Industries 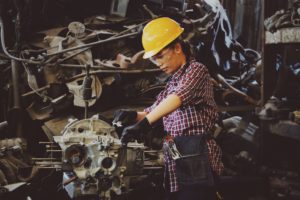 We’ve entered some tough economic times. The pandemic did quite the number on the U.S. economy, and the recent labor crisis has left many wondering what we can do to stay afloat. At least part of the answer may lie with the gender labor gap in trade industries. Historically, women have been significantly underrepresented in the skilled trades. But statistics showthat when there are higher rates of women in the trades, the economy does better.

Give Me The Details

Trade jobs were one of the only industries to experience steady growth during the pandemic, presumably because those services were still essential. But the trades workforce—decreasing largely because of retiring Baby Boomers—couldn’t keep up with growing demand. Today, that gap only grows wider.

Other than medical, culinary, and cosmetology trades, women make up far less than half of other skilled trade jobs, like plumbers, construction workers, electricians, mechanics, or even office jobs like paralegals.

Interestingly, in over half of American homes, women are the primary supporters of the household. And while the average female with a bachelor’s degree makes about $40,000 per year, women experienced in a trade can make upward of six figures annually. So what’s holding women back?

Barriers to Trade Entry for Women

There’s no doubt that there is a demand for skilled trade workers and thus room for women in trade industries. And even though all the signs point to the benefits of integrating more women into this workforce, there are still many barriers to entry.

The Western Resources Center for Women in Apprenticeship outlined several entry barriers for women in the trade industries. We’re going to cover a few highly relevant ones.

On top of all that, women in almost any industry, not just the trades, must perform exceptional work to “prove themselves.” An issue of Gender and Society stated that “a lot of experimental research has shown that people rate the same performance as better when told it was done by a man.” It can be daunting for women trying to enter a skilled trade because they must perform extremely well for others to perceive them as comparable to male workers.

This all paints a depressing picture for women looking to enter trade jobs. But the future may be looking up.

The Future of Women in Trade Industries

To evaluate the future, it’s often helpful to first look at the history of women in trade industries. Women cemented their place in the U.S.’s skilled labor force during WWI when their work was desperately needed in factories to sustain the war effort. Women helped design, test, and distribute products. Demand for women in the workforce skyrocketed again during WWII for similar reasons.

Today, there are many benefits to entering trade industries, and these don’t just apply to women:

Our society as a whole needs to accomplish some specific objectives to open doors for women in trade industries and help solve the labor crisis.

Women interested in trade careers can take online assessments to help determine if trade work is right for them. Many trade businesses offer a multitude of apprenticeships and assistant positions in trade careers to help women get started.