The Golden Age of Neon 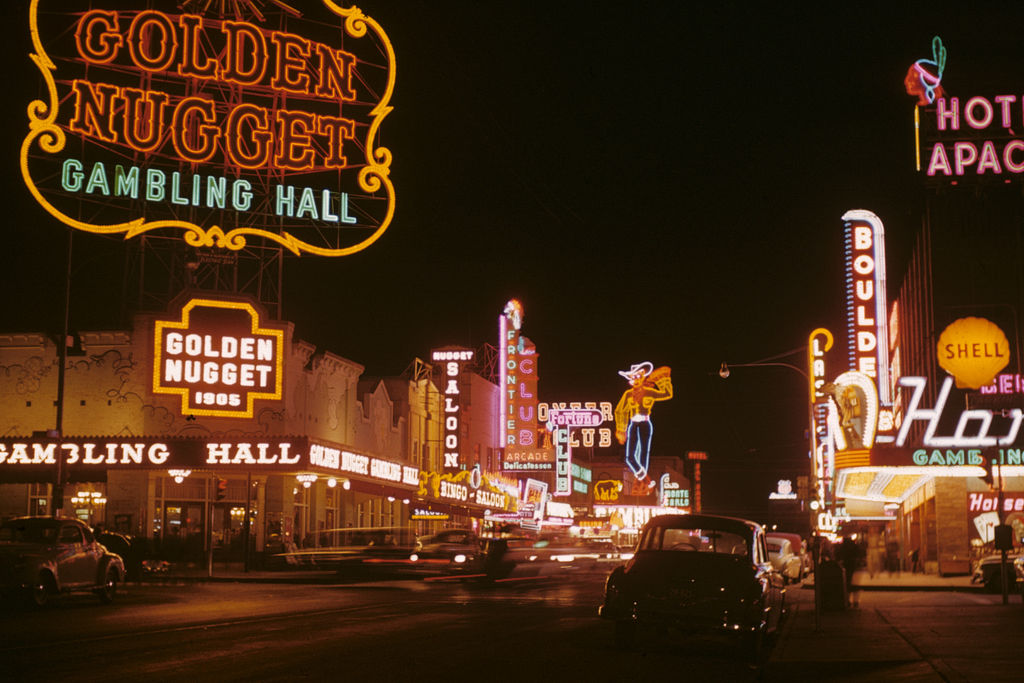 Neon signs: a reminder of time gone by. They hit their peak popularity from the 1920s to the 1960s. Streets were aglow with bright neon signs marketing business’s wares and services, everything from hotdogs to designer clothing at department stores to local nightclubs. Locales like the Las Vegas Strip and Times Square come first to mind when recalling these glowing streets. One particularly famous sign is the “Welcome to Fabulous Las Vegas” sign located on the southern end of the Strip. But where did neon originally come from? How did it rise to such popularity? And is it still a relevant form of signage today.

The Birth of Neon

Neon was first unveiled by Georges Claude, a French engineer, at the Paris Motor Show in 1910. By sending a voltage through the electrodes in a sealed glass tube containing rarified gas, Claude discovered that the tube would give off a “glow discharge”. While more rudimentary forms of this invention had been utilized for several years, like the Geissler tube, Claude’s air liquification company, Air Liquide, was able to produce industrial quantities of neon because it was a byproduct of the air liquification process.

After realizing its signage and marketing potential, Claude opened Claude Neon. By 1919, both the Italian vermouth brand Cinzano and the entrance to the Palais Garnier had illuminated neon signage.

In 1923, Claude brought neon signage to the United State, selling two signs to a Packard car dealership in Los Angeles. The signs were so bright that passersby would stop and stare as thy could see the  glow even in the daytime.

The neon signage craze spread like wildfire and became a veritable staple in outdoor advertising. Even though it was more expensive than other forms of signage at the time, businesses saw it as a novelty used to keep them competitive. The most notable innovation came with fluorescent tube coatings. These coatings allowed more color options. At the time, signmakers had about two dozen color options. Today, they have more than 100.

An interesting note: while neon was the original gas used in neon signs, it is only responsible for a few colors (mostly red and orange tones). Argon (doped with a bit of mercury and using phosphorescent coatings on the glass) was the other gas to produce such glowing effects, with colors ranging from blue, to yellow, green, purple, and white.

Though neon did fall out of style in the late 1950s and into the 1960s, it saw a small revival in the 1980s. TV shows like Miami Vice and Magnum P.I. used these bright colors to reflect each show’s tropical backdrop. This use in television helped bring the neon aesthetic back into public favor.

Because of environmental and health concerns, traditional neon signage is in little use today. Manufacturers originally made the glass with lead to soften it more easily with a gas flame, but health concerns caused by the lead forced them to look for more environmentally safe soft glass options.

Due to the safety concerns, inefficiency, and expense, the popularity of neon signage has waned over the years in favor of incandescent and LED signs. LED is now the primary source of lighting in illuminated signage as it is the most efficient. Manufacturers also LED in faux-neon signs and design elements.

Though sign makers use it significantly less, some still use neon signage to invoke the nostalgia of the 1940s and 50s. In recent years, the use of small neon signs has been trending in interior design, for both residential and commercial use, to add a pop of light and color to a space.

Neon-like elements and colors are also being used in graphic design. You can purchase entire digital kits to creatively implement these design ideas into graphics and digital art.

Even though the golden age is gone, the bright glow of neon will still remain a part of the signage industry.

Our History with Neon

North American Signs has been a proponent of neon signs since our founding as South Bend Neon in 1934, not long after neon made its advent in the United States. No matter what kind of illumination you need, we’re here for all of your signage needs!