How Illuminated Signage Impacts Your Brand 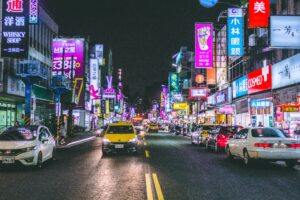 Both illuminated and non-illuminated signs can perform all four functions. While both fit all criteria for successful signage, illumination reinforces the sign’s ability to perform its intended marketing functions. In turn, a properly lit sign can increase your company’s competitive advantage.

Per a study by Taylor, Sarkees, and Bang (2012), 85% of a representative sample of U.S. on-premise sign users would lose sales if they did not have an on-premise sign. Additionally, the average reported loss across the entire sample for sites without signage was 34.5%.

The Correlation between Illumination and Profit Margin

To determine the correlation between illuminated signage and an increase in sales volume we will use the survey and sampling plan developed by Dr. Charles R. Taylor of Villanova University.

While there are multiple challenges to navigating permitting requirements, the survey points out three notable restrictions some companies face:

“Results indicate that lighted on-premise signs substantially impact the bottom line of many businesses. A sizeable majority of respondents (58%) indicated they would lose sales if government regulations prevented signs from being lit at any hour. For those who reported a sales loss, the average estimate was 21%. For the overall sample, including those businesses not reporting a loss, the average estimated loss of sales exceeded 10%.”

If the local ordinances allow for illuminated signage… go for it! Your sign is your business’s best salesperson, so allowing it shine even when the sun goes down ensures that you have a huge brand asset working for you 24/7. And even though illuminated signage does cost more, there are more cost-effective ways of obtaining it than ever before.

LEDs: The King of Illuminated Signage

First unveiled in the early 20th century, neon took the signage and advertising world by storm. It was the first form of illuminated signage and still lends an air of 1940s and 50s nostalgia to modern architecture and interior design today. Neon fell out of popularity with concerns over the lead used to make the glass tubing, and the mercury used to make certain colors of neon. Safety concerns, inefficiency, and expense caused sign makers to look for other ways to light signs.

The modern-day answer to efficient lighting comes in the form of light-emitting diodes, otherwise known as LEDs. LEDs are bulbs about the size of a pea that fit easily into an electrical circuit. The use of LEDs in electrical signage has increased significantly over the few decades. They are more advanced, brighter, and eco-friendly. This type of lighting has several advantages over neon, incandescent, and fluorescent lights, which make it the preferred light source of many customers for signage. Indeed, even the “neon” you see today isn’t true neon signage, but rather LEDs.

We can attribute a portion of the growth of demand for LEDs to businesses’ desire to be more sustainable. LEDs typically convert most of their energy use into light rather than heat and can last up to 10 years. LEDs are also safer than other forms of lighting, like neon, because they do not contain any mercury.

If non-illuminated signage is the only option available, it will still benefit the business and help increase foot traffic. But the question is will it benefit your business enough to be profitable? For most small businesses, a 10%-20% decrease in sales can easily deplete a business’s entire profit margin. Our fast-paced society relies on convenience and ease of use for many purchasing decisions. Restricting a sign’s illumination or duration of usage can cause the sign to go unnoticed, resulting in a decrease or loss of sales for the business.

So invest in illuminated signage for the long term. Your bulbs will last for years, and you’ll most certainly see a boost in sales!

This article was posted in Brand Impressions, Economic Value of Signs, How to Buy Signage, Increase Sales, Sign Design & Function, Sign ROI, Signs as Advertisement, Site Enhancement. Bookmark the permalink. Follow comments with the RSS feed for this post.Post a Comment or leave a trackback: Trackback URL.